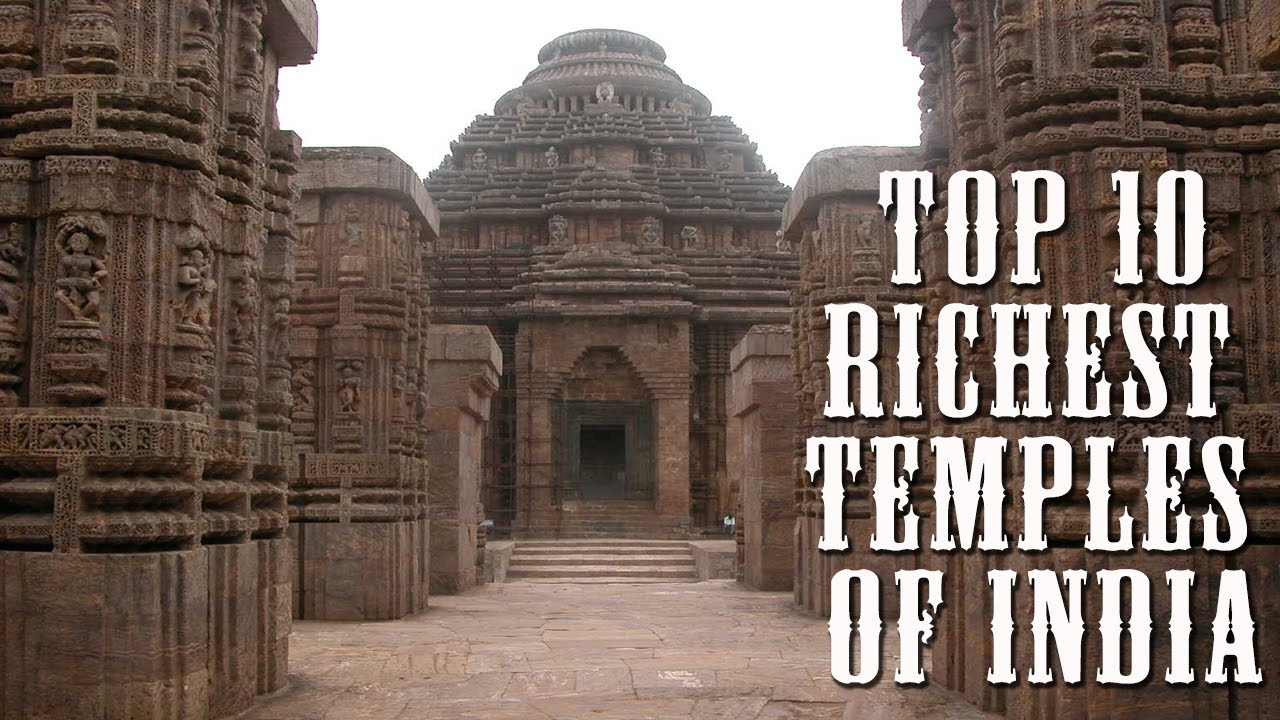 India has a rich cultural and historical heritage well preserved in its temple architecture and pilgrim sites. There are several famous Indian temples, and if you were to go anywhere in India you will find a few of them. A Temple is considered to be a sacrosanct place and people of all religions are welcomed into its pristine and peaceful surroundings. The temple depicts people the growth of religion throughout the country and its spread. There are several extremely rich temples in India and some of them are listed below.

The famous pilgrim center of Shri Saibaba temple in Shirdi, one of the richest temples in Maharashtra, has ornaments and jewelry worth over Rs 32 crore and investments running into Rs. 427 crore, according to official documents. The temple trust has ornaments and jewelry, including gold worth Rs 24.41 crore, silver worth Rs 3.26 crore, silver coins worth Rs 6.12 lakh, gold coins worth Rs 1.288 crore and gold pendants worth Rs 1.123 crore.

Tirupati temple is the abode of Lord Venkateshwara. It houses the richest temple in the world called Tirumala. The temple is also called the Vatican of the east. Endowed with dazzling waterfalls, lush greenery, the mystical seven surrounding hills, and being a place of natural beauty, it is a very popular center for pilgrimage and tourism. Tirupati is one of the world's richest temple where the deity is clad with about 1000 kgs of gold! It is the temple that has around 50,000 pilgrims each day.

The Siddhivinayak temple receives donations of around Rs 100-150 million every year, which makes it Mumbai city's richest temple trust. The Shree Siddhivinayak Ganapati Mandir is a Hindu temple dedicated to Lord Ganesh. The wooden doors to the sanctum are carved with images of the Ashtavinayak (the eight manifestations of Ganesh in Maharashtra). The inner roof of the sanctum is plated with gold. The temple has an annual income of Rs 46 crore and has Rs 125 crore in fixed deposits.

The Golden Temple, the most sacred place for Sikhs, in India. This is situated in Amritsar and attracts Sikhs from not only all over India but also the entire world. The Golden Temple at Amritsar, India, is the holiest shrine of the Sikh religion, and during daily mealtime, an estimated 80,000 people receive free food. The golden temple is open not only to the Sikhs and but people of all other religions are allowed within its precincts. On average, 350000-400000 people visit the Golden Temple every day. On occasions like Amavasya, Sakranth, Diwali, Vaisakhi, and Guruparv, the turnout increases considerably. According to temple officials, around 1 to 1.5 million people visit the temple on these days. The Sikh religion, which emerged in the Punjab region about 500 years ago, rejects the social hierarchies of caste, a precept of Hinduism. The principle of equality is enshrined in the langar, where everyone eats together sitting on the floor, regardless of social status. The Golden Temple's dome is said to be gilded with 750 kilograms of pure gold.

Also known as Sri Ananda Padmanabhaswamy Temple, this Mahavishnu Temple is located inside East Fort, in Thiruvananthapuram, Kerala. Lord Vishnu is enshrined here in the Anananthasayanam posture (in eternal sleep of Yog Nidra), lying on Sri Anantha, the hooded snake. All it took was an altercation between advocate TP Sunderrajan and the current head of the Travancore Royal family, Uthradom Tirunal Marthanda Varma, to light the treasure hidden within the Sree Padmanabha Swamy temple in Thiruvananthapuram.

Treasure worth around Rs 50,000 crore, which include antique gold ornaments, diamonds, and other precious stones, golden crown, golden bow, golden vessels, and other precious stones, have been found in the secret chambers of the Sree Padmanabhaswamy Temple. Some of the lists of gold inventory found in the temple include golden crowns, 17 kg of gold coins dating back to the East India Company period, gold in the shape of rice trinkets weighing one tonne, 18 ft long golden necklace weighing 2.5 kg, gold ropes, a sack full of diamonds, thousands of pieces of antique jewelry studded with diamonds and emeralds, and golden vessels.

One of the most religious and Hindu pilgrimage destinations in India, the Mata Vaishno Devi Shrine is located in the state of Jammu & Kashmir. The Shrine is one of the oldest shrines of India, located at a height of 5300 feet on the holy Trikuta Hills of the Shivalik Hill Range. Mata Vaishno Devi is the second most visited Hindu temple in India. The shrine has a daily income of Rs 40 crore and an annual income of Rs 500 crore.

The Guruvayur Sree Krishna Temple is a famous Krishna temple located in the town of Guruvayur in Kerala's Thrissur district. This is the most important Krishna temple in Kerala and one of the most important and richest temples in all of South India. Lord Krishna is known here as Guruvayurappan. The name of the Deity means the Lord (Appan) of Guru and Vayu. Guruvayur is known as Bhuloka Vaikuntha, where the spiritual world meets the earth. Lakhs of devotees visit the temple, which has an annual income of Rs 2.5 crore and has Rs 125 crore in fixed deposits. Around 25,000 devotees from across the world visit the temple every day. Guruvayur temple had about 13,000 acres of land until the Kerala Land Reforms Act came to force. Presently, the Guruvayur Devaswom Board has 230 acres of land, including that purchased after the Act.

The major income of Devaswom is from the temple as offerings by devotees. The temple has a corpus of Rs 400 crore. The shrine spends about Rs 2 crore on the rituals and maintenance and to provide for the 1,000 people on its rolls. Besides, rich devotees donate one-time grants and elephants to the temple. A recent news report stated that the Sri Krishna temple in Guruvayoor, Kerala, received a record collection of Rs. 2.5 crore in a month by way of hundi collection.