Here is a list of the health benefits of coconut water. 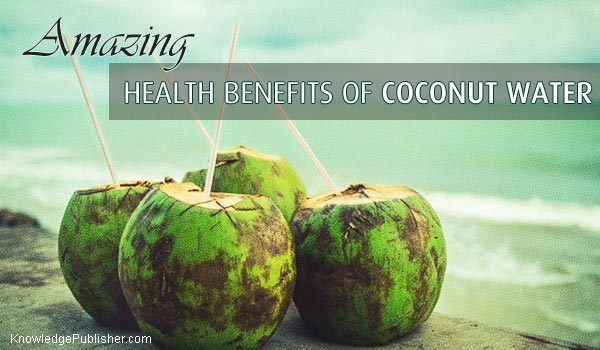 Low in calories, naturally fat- and cholesterol free, more potassium than four bananas, and super hydrating - these are just a few of the many benefits of coconut water. Coconut Water is naturally:

Here are little-known coconut water nutrition facts and how they can benefit your health. Coconut water contains organic compounds possessing healthy growth promoting properties that have been known to help

Coconut water is incredibly healthy and one of the best drinks to hydrate the body. Besides helping to remove toxins from the body and aiding digestion, coconuts have amazing antiviral, antifungal and anti-microbial properties that help to cure the disease. 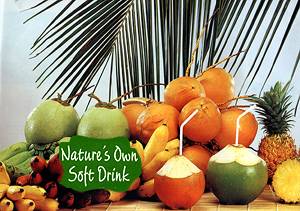 The English name coconut, first mentioned in English print in 1555, comes from Spanish and Portuguese word coco, which means "monkey face." Spanish and Portuguese explorers found a resemblance to a monkey's face in the three round indented markings or "eyes" found at the base of the coconut. On the Nicobar Islands of the Indian Ocean, whole coconuts were used as currency for the purchase of goods until the early part of the twentieth century.

Coconuts are the fruit of the coconut palm, botanically known as cocos nucifera, with nucifera meaning "nut-bearing." The fruit-bearing palms are native to Malaysia, Polynesia and southern Asia, and are now also prolific in South America, India , the Pacific Islands , Hawaii and Florida. The light, fibrous husk allowed it to easily drift on the oceans to other areas to propagate. In Sanskrit, the coconut palm is known as "kalpa vriksha, meaning "tree which gives all that is necessary for living," since nearly all parts of the tree can be used in some manner or another. The coconut itself has many food uses, including milk, meat, sugar and oil as well as functioning as its own dish and cup. The husk was also burned for fuel by natives, but today a seed fibre called coir is taken from the husk and used to make brushes, mats, fishnets, and rope. A very potent fermented toddy or drink is also made from the coconut palm sap. Coconut oil, a saturated fat made from dried coconut meat, is used for commercial frying and in candies and margarines, as well as in non-edible products such as soaps and cosmetics.

Although it takes up to a year for coconuts to mature, the trees bloom up to thirteen times a year, so fruit is constantly forming yielding a continuous harvest year-round. An average harvest from one tree runs about 60 coconuts, with some trees yielding three times that amount. The coconut's name is a bit of a misnomer, since it is botanically classified as a drupe and not a nut. It is the largest seed known.

If you've ever opened a fresh coconut, you will have seen the thin, opaque almost clear coconut juice or water which has a slight almond flavor. Contrary to popular belief, this is not the coconut milk. However, the water is consumed as a drink fresh from the coconut by many, and it can also be used in recipes.

"It's a natural isotonic beverage, with the same level of electrolytic balance as we have in our blood. It's the fluid of life, so to speak." In fact, during the Pacific War of 1941-45, both sides in the conflict regularly used coconut water siphoned directly from the nut to give emergency plasma transfusions to wounded soldiers.

Most coconut water is still consumed fresh in tropical coastal areas - once exposed to air, the liquid rapidly loses most of its organoleptic and nutritional characteristics, and begins to ferment.

"Coconut water is the very stuff of nature, biologically pure, full of natural sugars, salts, and vitamins to ward off fatigue and is the next wave of energy drinks but natural", according to Morton Satin, Chief of the United Nations Food & Agriculture Organization.

Nutrition Data is based on a 100 ml drink.

6 people found this article helpful what about you?