Wheatgrass is the young grass shoots of the wheatberry. The wheatgrass plant contains high concentrations of chlorophyll, active enzymes, amino acids, vitamins, and other nutrients. Wheatgrass is popular for its great health benefits to the human body. Wheatgrass is one of the richest sources of vitamin A and vitamin C, calcium, iron, magnesium, potassium, phosphorus, sodium, sulfur, zinc, cobalt, and protein. Wheatgrass juice is immediately absorbed into the bloodstream and gives immediate energy. There are several benefits of wheatgrass juice. It is also a powerful health food supplement that is packed with highly concentrated vitamins, minerals, chlorophyll and enzymes. The following advantages show that wheatgrass juice is very beneficial for health.

A major benefit of taking wheatgrass juice is that it is easily digested with little energy. Wheatgrass provides crude chlorophyll from a living plant, which is the most effective way to gain the full therapeutic benefits of chlorophyll. Just an ounce of wheatgrass juice per day provides a host of benefits, while a therapeutic program to treat a specific condition or illness may include two or three ounces. It is a complete food with no side effects. Many people grow their own organic wheatgrass and use juicers to make their own juice.

For the majority of people, consuming processed foods along with stresses of everyday life create an acidic balance in the blood. This causes the body to store water and build up fat in the arteries (cholesterol) as protection from acidic blood. By restoring alkalinity and neutralizing acid production your body can recover quicker, metabolize faster, reduce food cravings and achieve your optimal health. Wheat Grass is one of nature's most powerful sources of green leafy vegetable nutrition. Wheatgrass is considered to be a complete food in itself. The fact is that one pound of fresh wheatgrass is equivalent in nutritional value to 23 pounds of choice garden vegetables. Due to its fibrous nature, which is indigestible by humans, wheatgrass must be liquefied before it can be consumed.

A discussion on the benefits of wheatgrass juice or powder could be endless. Many of the health benefits of wheatgrass stem from the fact that it is a living food. Being highly anti-bacterial, consuming wheatgrass will help to alkalise and detoxify the lymph and blood cells, helping the body to rebuild and transport toxins out of the body quickly and effectively. Wheat grass is believed to have many unexplained natural healing qualities. One of the ingredients with major benefit in wheatgrass is chlorophyll, which has the ability to draw toxins from the body like a magnet. Considered the "blood of plants", chlorophyll can soothe and heal tissues internally. The chlorophyll in wheatgrass is high in oxygen and light energy, which can provide the brain and body tissues with an optimal environment in which to function. The chlorophyll in wheatgrass also has antibacterial properties, which can stop the development of harmful bacteria in the body. See below a list of wheatgrass juice benefits:

How to grow wheatgrass at home? 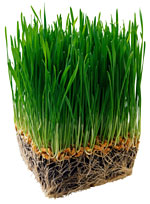 Some consumers grow and juice wheatgrass in their homes. It is often available in juice bars, alone or in mixed fruit or vegetable drinks. It is also available in many health food stores as fresh produce, tablets, frozen juice and powder. Growing wheatgrass to about seven inches tall is optimum for its health benefits. Simply place selected grain in about one-inch of organic soil to enjoy one of the most cleansing and nutritious juices. Indoor grown wheatgrass grows from 8-14 days before it is harvested. 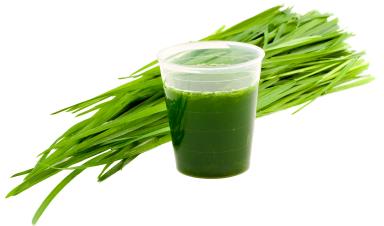 Benefits of Wheatgrass Juice for Hair

Wheatgrass juice has external benefits as well. It can be used as a scalp treatment to restore luster to hair, as a skin cleanser and astringent, and as a sinus treatment. There are many people that have seen their gray hairs vanish with regular intake of wheatgrass juice. Wheatgrass juice keeps hair from graying & removes dandruff.

Wheatgrass is known as an alternative cancer therapy. In a study it was found that wheatgrass juice duplicates the molecular structure of hemoglobin, a important part of the blood, and because it is so rich in free-radical scavengers such as provitamin A, it may inhibit cancer. Drinking of wheatgrass juice helps your body to build red blood cells which carry oxygen to every cell. By increasing the oxygenation the body you can help offset smog and carbon monoxide and increase your endurance during physical exercise. Wheat grass has been found to dissolve scars formed in the lungs and in addition helps wash drug deposits from the body, purifies the blood and organs and counteracts acids and toxins in the body. It helps to increase the enzyme level in our cells, aiding in the rejuvenation of the body and the metabolism of nutrients These enzymes assist in dissolving tumors.

Many health experts have explained that the chlorophyll molecule in wheatgrass is almost identical to the haemoglobin molecule in human blood. The only difference is that the central element in chlorophyll is magnesium and in haemoglobin it is iron. Due to this inherent similarity the human body can easily transform chlorophyll into haemoglobin increasing the red blood cell count as well as the blood's capacity to deliver oxygen and other nutrients to the body's cells. Chlorophyll has been shown to build red blood cells quickly, normalise blood pressure by dilating the blood pathways throughout the body, destroy poisonous carbon dioxide, release free oxygen and promote higher metabolism and stimulated enzyme systems.