Mild forms of alcoholic hepatitis may not cause noticeable problems, but as the disease becomes more advanced and the liver more damaged, signs and symptoms are likely to develop. These may include:

These symptoms may vary, depending on the severity of the disease, and are likely to become worse after a bout of binge drinking.

The liver is the body’s workhorse. It performs hundreds of vital functions, including processing most nutrients, producing bile and substances that help the blood clot, and removing drugs, alcohol, and other harmful substances from your bloodstream. Although the liver has a great capacity for regeneration, its constant exposure to toxins can cause serious - and sometimes irreversible damage. 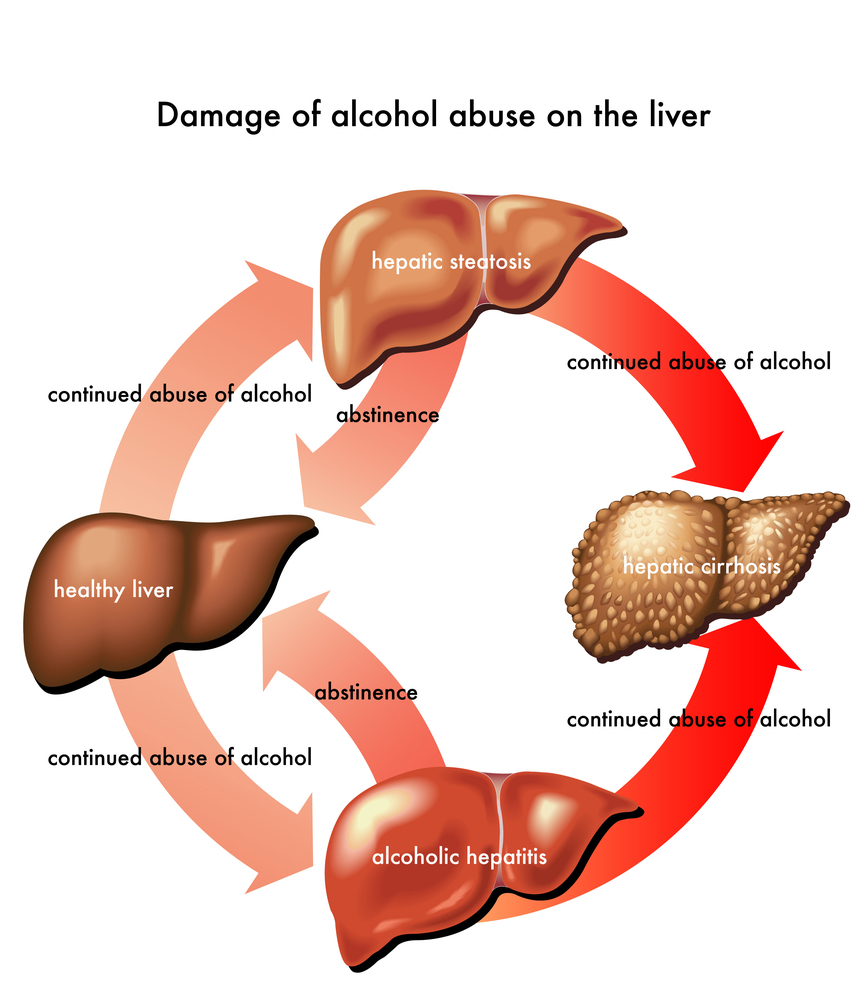 Just how alcohol damages the liver - and why it does so only in a minority of drinkers - isn’t entirely clear, although a number of hypotheses exist. It is known that the process of breaking down ethanol - the alcohol in beer, wine, and liquor - produces highly toxic chemicals such as acetaldehyde. These chemicals trigger inflammation that destroys liver cells. In time, web-like scars and small knots of tissue replace healthy liver tissue, interfering with the liver’s ability to function. This irreversible scarring, called cirrhosis, is the final stage of alcoholic liver disease.

Heavy alcohol use can lead to liver disease, and the risk increases with the length of time and amount of alcohol you drink. But because many people who drink heavily or binge drink never develop alcoholic hepatitis or cirrhosis, it’s likely that factors other than alcohol play a role:

When to seek medical advice

See your doctor if you develop any of the signs or symptoms of alcoholic hepatitis, including severe fatigue. Often, fatigue may be the first indication of liver disease. Severe symptoms such as gastrointestinal hemorrhage or serious mental confusion require emergency care.

Because there are more than 100 liver diseases and a wide range of factors that can cause them, including viral infections, drugs, and environmental toxins, diagnosing alcoholic hepatitis can be challenging. In addition to full medical history, including questions about your drinking habits and a physical exam, you’re likely to have certain tests, including:

Complete abstinence from alcohol is the single most important treatment for alcoholic hepatitis. It’s the only way to reverse liver damage or, in more advanced cases, to prevent the disease from becoming worse. Without treatment, the majority of people with alcoholic hepatitis eventually develop cirrhosis.

If you are dependent on alcohol and would like help, your doctor can recommend a therapy that’s tailored for your needs. This might be a chemical dependency evaluation, a brief intervention, counseling, an outpatient treatment program, or a residential inpatient stay.

Other treatments for alcoholic hepatitis include:

The only sure way to prevent alcoholic hepatitis is to drink very lightly or not at all. People vary greatly in their sensitivity to alcohol, and even occasional social drinkers may risk liver damage. If you have been diagnosed with alcoholic hepatitis, you should not drink alcohol again.

These measures may also help reduce your risk of alcoholic liver disease: