There are no good effects of smoking on smoker's body. Smoking causes only bad effects on the health of the smoker. The ingredients of tobacco smoke are chemically active. They can start dramatic and fatal changes in the body. There are over 4,000 chemicals, which can be damaging to the smoker's body. They include tar, carbon monoxide, nitrogen oxides, hydrogen cyanide, metals, ammonia, and radioactive compounds. 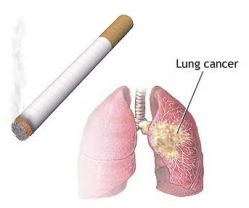 Scientists and doctors know so much more about the effects of smoking today than ever before. They know smoking causes immediate effects on the smoker's body. It constricts the airways of the lungs. It increases the smoker's heart rate. It elevates the smoker's blood pressure. The carbon monoxide in tobacco smoke deprives the tissues of the smoker's body of much-needed oxygen. All of these are dangerous short-term effects.

There are more serious long-term effects as well. Smoked tobacco in the forms of cigarettes, pipes, and cigars causes lung cancers, emphysema, and other respiratory diseases. In fact, smoking causes ninety percent of all lung cancer cases.

Check out the information below to view the list of Bad Effects of Smoking.

How Smoking Affects the Body

There's hardly a part of the human body that's not affected by the chemicals in the cigarettes you smoke. Let's take a tour of your body to look at how smoking affects it.

As a smoker, you're at risk for cancer of the mouth. Tobacco smoke can also cause gum disease, tooth decay, and bad breath. The teeth become unsightly and yellow. Smokers may experience frequent headaches, lack of oxygen and narrowed blood vessels to the brain can lead to strokes. Moving down to your chest, smoke passes through the bronchi or breathing tubes. Hydrogen cyanide and other chemicals in the smoke attack the lining of the bronchi, inflaming them and causing that chronic smoker's cough. Because the bronchi are weakened, you're more likely to get bronchial infections. Mucus secretion in your lungs is impaired, also leading to chronic coughing. Smokers are 10 times as likely to get lung cancer and emphysema as nonsmokers. Just have a look at the lungs of a smoker and a non-smoker in the picture below, the difference is clear. 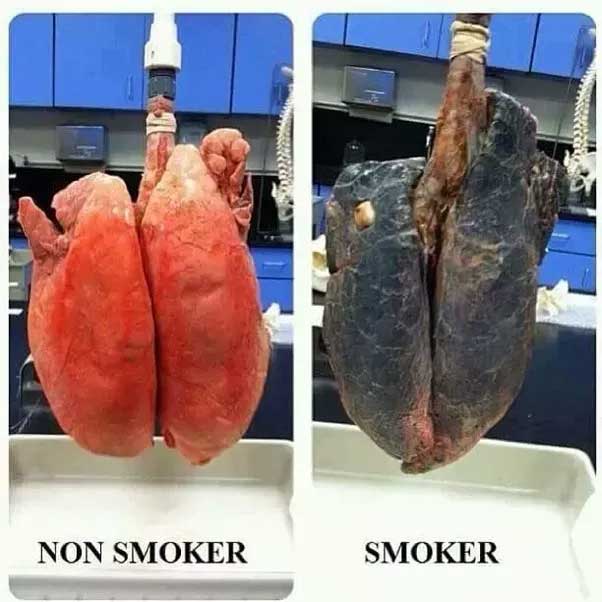 The effects of smoking on your heart are devastating. Nicotine raises blood pressure and makes the blood clot more easily. Carbon monoxide robs the blood of oxygen and leads to the development of cholesterol deposits on the artery walls. All of these effects add up to an increased risk of heart attack. In addition, the poor circulation resulting from cholesterol deposits can cause strokes, loss of circulation in fingers and toes and impotence.

The digestive system is also affected. The tars in smoke can trigger cancer of the esophagus and throat. Smoking causes increased stomach acid secretion, leading to heartburn and ulcers. Smokers have higher rates of deadly pancreatic cancer. Many of the carcinogens from cigarettes are excreted in the urine where their presence can cause bladder cancer, which is often fatal. High blood pressure from smoking can damage the kidneys.

The health effects of smoking have results we can measure;

But the good news is that when you quit smoking your body begins to repair itself. Ten years after you quit, your body has repaired most of the damage smoking caused. Those who wait until cancer or emphysema has set in are not so lucky - these conditions are usually fatal. It's one more reason to take the big step and quit smoking now.

Many smokers do not realize that there are treatment programs designed to help them quit the bad habit of smoking.