Dealing With Failure - How to deal with failure?

All of us want to be successful. All of us have big dreams. We all try very hard to achieve them. But on our way to achieving those dreams, if we face a failure, we just break down totally.

How to deal with failure? 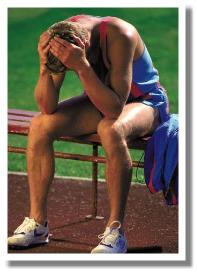 Sometimes we don't even feel like trying the same job again just because of the failure we faced in the previous attempt. And if we get up and start doing it, we are not able to put our 100% in it. Consciously or unconsciously, the fear of failure affects our performance. Students put so much effort in studying for exams, and if they end up getting a B or C grade, then they hardly look forward to next semester. If we stop doing everything just because of the fear of failing, then the world will come to an end. Then, what exactly should we do to overcome it? Let's take some moments and see if we are able to conquer the failure or if failure would be able to conquer us.

First of all, we have to stop looking at failure in a negative way. People tend to link failure with weakness, stupidity, and dumbness. I totally disagree with that. If you are doing something, and you think you are just perfect in it that means something seriously is going wrong with it. When a person thinks he is perfect, he has closed all doors for any growth or improvement. Whenever there is imperfection, there are million chances of improvement. A person keeps on growing, but a so called 'perfect person' just stops growing. He is in this illusion of being perfect which hinders his growth forever. Look at failure as another step toward success. Make yourself positive enough to see the good sides of failure.

Don't Label Yourself a 'Failure'

There was a man who:

and was elected as the President of the United States at the age of 52! He was none other than Abraham Lincoln. He could have labeled himself a failure and ruin his whole life. Instead, he decided to ignore failure and fight against all odds.

Always remember that only highly intelligent people face big failures. They are the ones who cannot get things done in a right manner in first attempt. The reason for this is very simple. A person who follows orders and fulfills them right away, without thinking, is like a machine. There is no difference between that person and a machine. You tell him something and he will do it. However, a successful person is very different. If you tell him to do something in a certain way, he will ask you why he can't do it in other way. He will not follow your order blindly. He always say, "Why not the other way?" He always thinks different from crowd and that's where he succeeds.

An average student will follow what his professor has to say. He will learn the whole book and his professor's lecture word to word. But a genius-minded student would ask the professor so many questions about the whys and the wherefores. His questions will be beyond the coursework.

That average student might end up getting a better grade than that genius student. But in long term, it will be that genius student whose name will be remembered for a long time. However, that average student remains average forever his life. So, stop thinking that you are a weak or dumb student if you end up getting a low grade in spite of asking so many questions in every class. Rather be proud of yourself that your mind is much more polished than other students in the class.

See What You Have Learned

When you fail to do something, look back and see how much you have learned. You will be surprised to see that you have learned so much that you would not have learnt if you succeeded in the first attempt. Thomas Edison failed approximately 10,000 times while he was practicing on the light bulb! When people asked him to quit this project, his reply was, "I have gotten lots of results! If I find 10,000 ways something won't work, I haven't failed. I am not discouraged, because every wrong attempt discarded is often a step forward...."
If you have this kind of attitude, there is no way why you won't be successful. Every failure teaches you something. You just have to see what mistakes you made and learn from them. The more mistakes you make, the smarter you will become. Just don't make the same mistake twice because that will make you stupid. Learn from your first mistake and don't repeat it.

No matter how people react to your failure, you should never ever give up. If you start giving up after your every failure, you will see that you will accomplish literally nothing in life. You will start doing something and will quit it forever after you fail in it. In this way, your skills will never be polished. Your dreams will never see the light of day.

Every success story is also a story of a great failure. The only difference is that the successful people never gave up. Instead, they bounced back with a much more energy and enthusiasm every time they failed. There was a partially deaf child who was expelled from school because his teachers considered him too stupid to learn. His mother decided to teach him and show everyone how intelligent her son is. Her son was none other than the great Thomas Edison. Edison had only three years of formal schooling.

Don't get discouraged if it is taking a little longer than you expected. The more time it will take the better performance it will give. Don't think that you will never achieve your goal or you will never get you want. Failure might cause your goals a little delay but it doesn't mean that you will never achieve them. It simply means that it will take just little longer. When Beethoven was young, everybody used to tell him that he has no talent for music. He knew that he will be the best composer after a considerable time. Today everyone knows that he gave the world some of the best music.

We need to update our dictionaries. We have to remove some of the words and change the meaning of some of them. 'Failure' is one of those words whose meaning needs to be changed. Today onwards, see failure as a chance to bounce back with full of energy. Look at failure as an opportunity to improve more and polish your skills. View your failure as a road to success. I am sure if you follow the above suggestions sincerely, then you will be one of those rare people who make it big no matter what circumstances are. All the best!